A Second Life for a Beloved Tree

Hotel Bougainvillea-Your home away from home

A Second Life for a Beloved Tree

Over forty years ago, Hans Van der Wielen and his wife Judy Paskel were gifted a pot with a flowering plant, and a couple of weeks later, two Guanacaste seedlings proudly came up. The sprouts quickly grew into saplings sturdy enough to be planted in what would one day be a central location in the Hotel Bougainvillea’s botanical garden.

The magnificent trees became part of the main arboreal attractions of the garden, providing cover to a diverse variety of tropical wildlife, including birds, lizards, squirrels and bees. Over the years, thousands of visitors have sat under their boughs as they enjoyed a cup of coffee or scanned the delicate foliage hoping to spot a particular bird.

In 2015, despite much effort, one of the trees began to succumb to the ground fungus Rosellinea, which attacks tree roots. A few months later, the roar of chain saws ripped through the garden, tearing not only at the trunk and branches, but at the hearts of those who had worked and grown up alongside the guanacaste.

As staff and guests sadly watched, the great tree was reduced to a pile of logs and branches, thinking “Surely the life of this beloved Bougainvillea family member mustn’t end like this”.

Enter Donny Madrigal, a sculptor from the province of Guanacaste (the tree’s namesake), who was entrusted with transforming a few of the larger pieces into works of art.
Representing the essence of mother earth and family, our tree lives again in two sculptures that welcome visitors to our hotel lobby with their unique stylized forms. 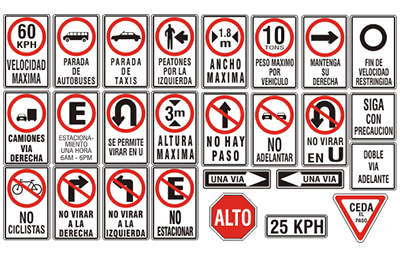 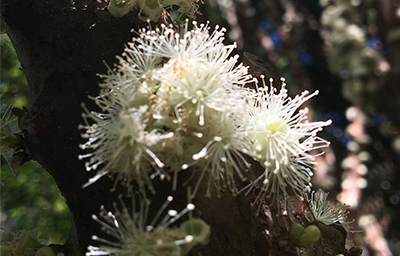 The Jaboticaba is blooming! 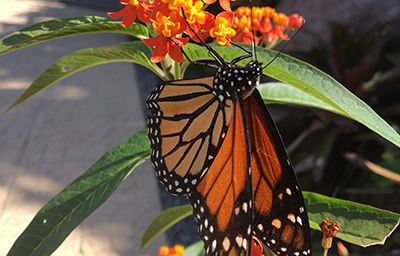 In Search of Monarchs? Look No Further!